In civilised World the Metro Bus service is used for travelling by hundred of thousands of commuters daily but in our land of pure, the metro serves a unique purpose, you blame every wrong doing happening in the country on Metro whether children dying due to lack of facilities in Sargodha hospital, heavy rains causing city flooding, floods destroying crops, rescue 1122 not able to perform its duty efficiently or Power outages, in fact Metro is cursed for hundreds of other reasons. It has become a tool for  opposition to mock sitting Punjab Government for every wrong doing happening in the province, in a way these inept politicians bail out the government for  their mischief and inefficient policies, of different institutions which fail to do their jobs. 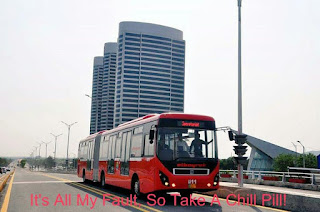 Metro comes under stern criticism due to its cost, popular belief that we are a poor country so millions living in big cities should walk to their jobs as it keeps you fit, doesn't matter  even if it take hours to reach destination or you should use waggons which literally brings you on your knees during the travel, makes your body stiff like hell and when accident happens, break your legs at two three places if you are sitting or break your spine if you are kneeling. You look like a goof at the end of your travel while you had left your home in pretty good shape. If somehow you decide to travel in a Rickshah it kills you with noise pollution, if somehow you survive, the Rickshaw fare will make your head spin in all directions. If you are a bit of hurry and hire a Taxi, it will ruin your monthly budget but who cares, all those criticising and mocking don't need Metro they either use cars  or Parados while few even use private Planes or helicopters. An innocent blogger went on to write that Pindi-Isloo Metro is complete waste of money as most of us use cars then why the hell they are building a Metro ? look at his Innocence ?

Countries like Brazil started this BRT "Bus rapid Transit" in 1974, then it expanded to other countries, Now world wide  nearly 4800 km line has been build for this system, about 32 million travel daily on this system, 13 million travel alone in Brazil. This system, was a brain child of Curitiba Mayer Jaime Lerner, latter modified in different countries according to its needs. If we go by logic of our politicians and their followers the Mayor was an idiot who thought of this idea which not only gave his countrymen a cheap alternative to Western system, in fact became a source of inspiration to other Latin American countries and rest of the World who relied on this system which is benefiting millions daily.

Now lets talk about the criticism our poor Metro faces day in and day out.

The poor Pindi-Isloo Metro used 44 billion rupee of Punjab budget which is ten times less than the money to build under ground tram system of same length, which is less than 5% of total Punjab Budget, it will serve 125-135k people daily, meaning 3.7-4 million people monthly, costing them only 40 rupee on a two way journey. It will save them  hundreds of rupee daily, less risk to their life's, will provide a comfortable ride, most importantly no hassles and more time for their families and studies as it will save hours daily. I tell you honestly all those criticising just put them once in that Hiace travelling from Sadar Pindi to Faizabad they wouldn't even dare oppose this Metro. metro alone will save thousands of litre of Petrol as comprehensive studies carried out on this system have shown, will stop  hundreds of accidents monthly, will save many important life's due to safe travel. One does't have to be great mathematician, if one man saves 15 minutes(this is bare minimum) by travelling from Pindi to Islamabad, how many days 150 K will save in a single day. It will set your head rolling.

Metro system only a part of Punjab Road Infrastructure network, the biggest program launched by Punjab is 150 billion program, linking villages, Farms to Mandis and Tehseels, this program has to complete in 3-4 years, 15 billion of first trench has  already been  released, so when you say Metro is the biggest Punjab Road infrastructure project please think twice. Punjab education ( 273 billion ) and health budget ( 122 billion ) is almost half of total Punjab budget ( 40% ) while Punjab Metro budget not even 10% of both combined,  if both the institutions are not performing well what it has to do with Metro ? Rescue 1122 functioning in all districts of Punjab and more than 15 Tehseels as well, allocated billion of rupees yearly, serving hundred of thousands, inefficiency at few places has to be seen carefully as it is one of the most efficient department of Punjab Government, run independently under Dr Rizwan.

2) Another criticism that Sharifs using these project to gain political mileage over opponents, showcasing this as a great success story ?

Again the answer is very simple they are political leaders what else you expect from them ? If they use these projects to enhance their reputation I guess they deserve every bit of it ? I guess you need to watch our Neighbouring Prime Minister how he is trying to build his PR sometimes even looks stupid. How Barrick Hussain Obama used health bill to win his Presidency, even he asked his Governors and Senators to show their physical presence during inauguration of different uplift projects because it means a lot. I guess solution is quite simple rather cursing Metro all the time, start projects in your provinces as every party sitting in different province and claim credit rather than blaming Metro for your woes.

3) Another criticism by ignorant souls is that Metro running with Subsidised money, Lahore Metro using almost one and half billion yearly for cheap ride, the subsidy will mount further with Pindi-Isloo Metro.

This is called direct subsidy in civilised world, used directly by Middle to Lower Middle and Lower Class as well. Middle Class is backbone of any economy, gives you skilled labour, contributes heavily in direct and indirect taxes while the lower class can"t even afford the honorable ride in big cities if there were no subsidised Ride available. The middle class in the World is beginning to realise their legitimate rights as we have seen in Egypt spring, its the right time that our political elite give them their due share in economy. Secondly if you study the worldwide Model of Metros, City Buses, Underground Tram, City Trains from London to Russia etc they all are subsidised. So its high time that our SM Jihadis, Rich Media Anchors and Political elite forget this 4-5 billion rupee subsidy out of 1 trillion Punjab budget rather focus on more realistic issues.

4) Another blame on poor Metro whenever we have long hours of Power Outages why on earth Sharifs not diverting this money to power projects ?

Secondly who is stopping provinces to build Power Projects after 18th amendment ? Punjab has already started a Solar Park, which is beginning to contribute 100 MW in National Grid, 350 MW at the end of this year and 500 MW by DEC 2016. Punjab is  also building 150 billion 1250 MW Power project at Sahiwal. Federal Government with the help of China has finalised a historic 46 billion Dollar Pak-China corridor, 33 billion dollar to be used purely on Power Plants and power infrastructure. So please stop blaming Metro for all the stupidity happening in your life's.

5) Finally a valid criticism comes when they talk about appointing Hanif Abbasi the Chairman of Pindi-Isloo Metro, His qualification, Merit of his appointment, corruption related to the project.the only valid criticism but unfortunately no party or a leader comes up with some sort of evidence of corruption or pursue the matter of Hanif Abbasi appointment as Metro Head in Parliament, stage a dharna for an honest appointment ?
Posted by Unknown at 03:15